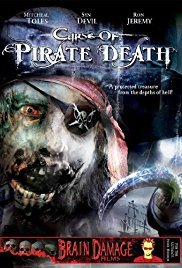 A protected treasure from the depths of Hell!
Advertisement:

Curse of Pirate Death is a 2006 American Slasher Movie.

A century ago, Abraham LaVoy terrorized Pirate's Point, slaughtering over 150 people. Earning the nickname "Pirate Death," the madman lived on even after death as a mad revenant. Pirate Death haunts the area, slaughtering anybody who takes his treasure. A group of teenagers end up researching the area, and disturbing the curse...