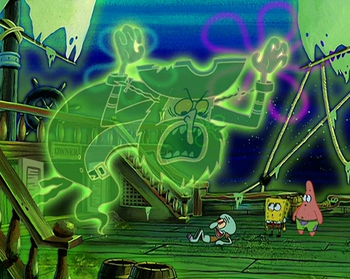 "Who be disturbin' the Flying Dutchman in his own lair?!"
"Little does she realize pirates always have ghosts...!"
— Jason Fox, FoxTrot
Advertisement:

Sometimes the most scurvy and fearsome of Pirates, even after being sent to Davy Jones' Locker, just don't stay in their watery graves. Instead, they continue to terrorize the seas as fearsome undead scourges, complete with a Ghost Ship crewed by the damned. Despite the name, the Ghost Pirate trope includes all forms of undead pirates, including zombie or skeletal variants (literal skeleton crews).

Occasionally, their sojourn as the living dead is due to a terrible curse that keeps them sailing (which may or may not involve voodoo). Other times, they're just too tough to stay in hell.

Legends of ghost ships and ghost pirates alike may derive from the tale of the Flying Dutchman, a phantom ship reportedly doomed to sail the oceans for eternity. Though of course, not all Ghost Ships have ghost pirates. This is a common form of Ninja Pirate Zombie Robot. Also see Davy Jones, who may sometimes be a Ghost Pirate himself.

Elizabeth best start believing in ghost stories. She's in one.

Elizabeth best start believing in ghost stories. She's in one.