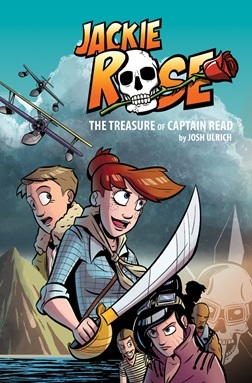 Jackie Rose is a adventure webcomic created by Josh Ulrich, author of Newman.

The series is set in an alternate take of the 1940s and focuses on Jackie Rose, a normal teenager who lives with her father and hangs out with her friend Eddie. On the week of their spring break, the duo head off on a airline cruise and everything is going well until it's raided by air pirates, lead by the infamous Captain Elizabeth Read who ends up capturing the two of them. What follows is a crazy adventure filled with danger, intrigue and quite a few revelations involving Jackie herself.

Originally a more straight forward Indiana Jones type of comic, Josh reworked the series into it's current form though the original story can be read on it's webpage.

The comic eventually reached it's end on August 5, 2017 after two "seasons".