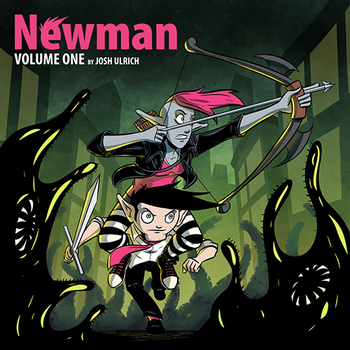 Newman is an Urban Fantasy webcomic whose characters are various DND races. The main character, a gnome named Newman, works for the Creature Removal Department with a drow named Gwen, who happens to be the princess of the drow kingdom. The webcomic is largely an action comedy with romance, focusing on Newman and Gwen's adventures and relationship.

Gwen's culture surprises Newman when he learns that traditionally the husbands are their wives' slaves. Newman is drawn in as he ends up being marked, discovers that Gwen has mind-control powers over him, and gets a collar. He also sees the extent of servantship in Gwen's family and friends as he connects with them. Gwen (it appears) rarely uses her mind-control powers, however, often letting him know that she doesn't need mind control powers to get him to do what she wants, and their relationship is sincere.

In their day job, they destroy monsters in any local areas, small and big (generally posing a direct danger to the populace). Over time they face more and more nefarious monsters and unravel a plot that could destroy the world as they know it.

You can read Newman on Webtoons.

Has nothing to do with Jerry's arch nemesis.

Newman has the following tropes: