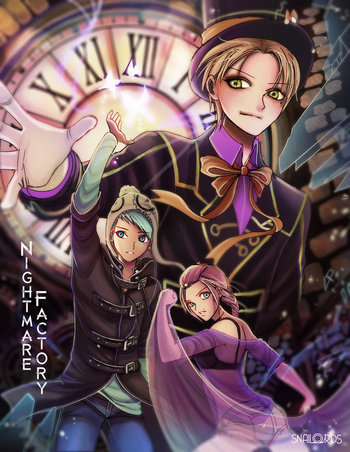 Welcome to the Nightmare Exchange.
Advertisement:

Nightmare Factory is a Webcomic created by Snailords in 2016. It is a fantasy series that follows two characters: Kreyul Arroyal and Emai Kashew. Emai is an insomniac writer who has stories constantly streaming through her head, usually about a character called Kreyul. So when she accidentally gets sucked into a horrifying world called The Nightmare Exchange, where she has to survive her greatest fears for 24 hours, she makes a deal with the Game Master, a mysterious figure named Phirre Lotus, to allow her to bring one of her characters in with her to help her succeed in surviving. Thus, Kreyul joins the game, despite being a real person, and not just a figment of her imagination. Now they just need to survive...

However, the entire story is not about The Nightmare Exchange. No, there's things happening outside of it that influence the characters a lot.

. It has a total of one season, and while it is labelled as completed, Snailords has said that it is on indefinite hiatus for the moment, and may or may not return in the future.