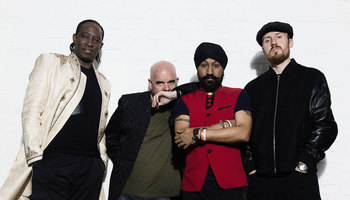 Afro Celt Sound System was a world music band based in the UK. As implied by the name, they played a mix of Irish Celtic, West African, and electronic dance music.

In 1991, producer Simon Emmerson was collaborating with Afro-pop star Baaba Maal when he heard an African melody, which struck him due to its similarity to an Irish air. Emmerson’s interest in the similarities between the two traditions was piqued further when he heard a theory that the nomadic Celts had lived in Africa prior to migrating to Europe.

In 1995, Emmerson brought traditional Irish musicians and members of Baaba Maal’s backing band to jam together at Peter Gabriel’s Real World studios for a week. The experiment proved a rousing success, and the collective’s first album, Sound Magic, was released the following year. A proper band was formed from these session musicians. Live shows and more albums followed, and Afro Celt Sound System grew to become the second best-selling artist on Real World Records (second only to Peter Gabriel himself).

The band went on hiatus in 2007, then reunited in 2010 to play a series of live shows and promote their Greatest Hits Album, Capture.

They also composed original music for the 1999 PC game Magic and Mayhem and the 2004 film Hotel Rwanda.