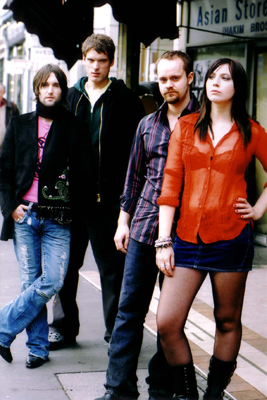 Ash's old line-up (L-R: Tim Wheeler, Mark Hamilton, Rick McMurray and Charlotte Hatherley
Do you remember the time I knew a girl from Mars?
I don't know if you knew that,
Oh we'd stay up late playing cards Henri Winterman cigars,
Though she never told me her name,
I still love you girl from Mars...
"Girl From Mars"
Advertisement:

Ash is an Alternative Rock band started in 1992 in Northern Ireland. Its line-up consists of:

Their style can be generally summed up as Britpop with elements of Grunge, Pop Punk and Power Pop, although recently they've been experimenting with NewWave and synths.

They can also be distinguished by their love of Science Fiction, especially Star Wars (their breakthrough album 1977 was named in honour of the year A New Hope was released; the first sound on that album is a TIE Fighter, and the last song ends with a choral version of the Star Wars theme) and the fact that they were in their teens when they created the band.

Not to be confused with that other Ash or Ash: A Secret History.

Tropes that apply to the band include: