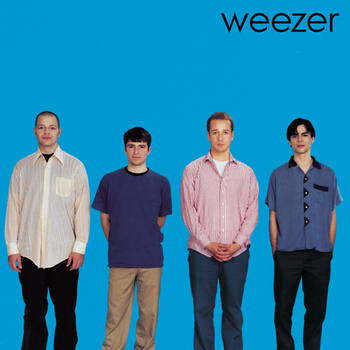 Only in dreams, we see what it means
Reach out our hands, hold onto hers
Advertisement:

Weezer (retrospectively known as The Blue Album to separate it from the band's other self-titled releases) is the debut studio album by Weezer, released in 1994.

It generated massive critical acclaim upon release thanks to its softer, more radio-friendly sound in the midst of the Alternative Rock and Grunge movements of The '90s, and would prove to be an inspiration for countless softer emo and Pop Punk bands in the years to come.

Produced by Ric Ocasek of The Cars, The Blue Album captured a sense of irony characteristic of younger bands, while the band's nerdy persona garnered a cult following from audiences outside the core Post-Punk movement. The album's Power Pop and Arena Rock melodies helped elevate Rivers Cuomo's charming but angst-filled lyrics, which made the subject matter accessible to a mainstream audience.

"Buddy Holly", "Undone (The Sweater Song)", and "Say It Ain't So" were very well-received on the radio; the music videos for the former two songs were directed by Spike Jonze, whose creativity contributed to extensive airplay on MTV. Weezer's clean-cut image spurred their success, though it eventually proved to be a thorn in the band's side as their lyrical concerns began to mature and their style began to progress.

Rivers Cuomo would later dismiss the videos as "gimmicky", and his disillusionment with the rock lifestyle resulted in the band's original plans for their second album, a Rock Opera titled Songs from the Black Hole, to be scrapped and eventually replaced by their Darker and Edgier 1996 follow-up Pinkerton.

The deluxe version of the album featured, apart from live versions and remixes, the following tracks: