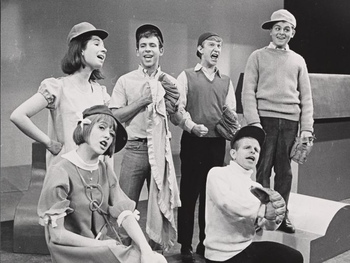 "Happiness is morning and evening
Daytime and nighttime, too
For happiness is anyone and anything at all
That's loved by you"
— "Happiness"
Advertisement:

You're a Good Man, Charlie Brown is a comedic stage musical inspired by Charles M. Schulz's comic strip Peanuts, with music and lyrics by Clark Gesner and book by "John Gordon" (a pseudonym for the cast and crew, who worked together to select and adapt dialogue from the original comic strips). The musical consists of a series of vignettes centered around Charlie Brown, Snoopy, and the rest of the gang.

First performed off-Broadway in 1967, with Gary Burghoff (who would go on to play Radar O'Reilly on M*A*S*H) heading up the cast as Charlie Brown and a young Bob Balaban playing Linus. It has been adapted to television twice, first as a live-action Hallmark Hall of Fame production in 1973 and again as an animated special in 1985 as part of the Bill Meléndez and Lee Mendelson canon of Peanuts television specials. It returned to the stage as a Broadway revival in 1999, which starred Anthony Rapp as Charlie Brown, Roger Bart as Snoopy, and Kristin Chenoweth as Sally (the latter two earned Tony Awards for their performances); and once more off-Broadway in 2016, a production that broke with tradition by casting child actors in all the roles.

Tropes for the Animated Adaptation:

Tropes for the Broadway Revival: