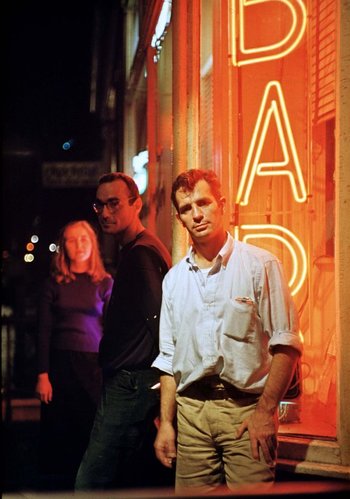 "I want to work in revelations, not just spin silly tales for money. I want to fish as deep down as possible into my own subconscious in the belief that once that far down, everyone will understand because they are the same that far down."
Advertisement:

Jean-Louis "Jack" Kerouac (March 12, 1922 – October 21, 1969) was an American writer (of French-Canadian descent) associated with The Beat Generation and best known for writing On the Road, an autobiographical novel describing Kerouac's travels with Neal Cassady. He also wrote The Dharma Bums, which details his adventures with fellow writer Gary Snyder.

Interesting note: For a major figure of literature in the English language, Kerouac came to the language rather late: he was raised in a French-speaking (or rather, Joual

-speaking) household, didn't learn English until he was six, and wasn't confident speaking English until high school. Rather impressive, eh?note Other English literature writers who came to the language late include Joseph Conrad and Vladimir Nabokov He also wrote a few short stories in his native tongue, which have received increased attention since it was discovered that Kerouac had originally planned to write On the Road in French and actually produced an abortive manuscript of it before producing the famous version.

"Home I'll Never Be" and "On The Road" were both adapted to song by Tom Waits on his album Orphans: Brawlers, Bawlers & Bastards.

Works by Jack Kerouac with their own pages:

Other works by Jack Kerouac provide examples of: