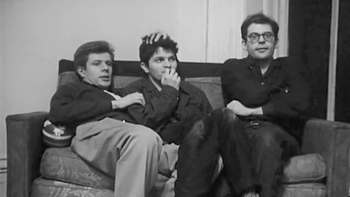 Pull My Daisy is a 1959 short film (30 minutes) directed by Robert Frank and Albert Leslie. Jack Kerouac starred in the film as himself, and also wrote the screenplay, which was adapted from his play Beat Generation.

Milo is a railroad brakeman. He and his wife have invited their local bishop over for dinner. Unfortunately for Milo's wife, her husband is friends with a group of eccentric beatniks, including Kerouac and Allen Ginsberg. The eccentric beatniks make the dinner go awry.

Inspired by a real-life incident with the "Milo" character being Neal Cassady, who also inspired the character of Dean in Kerouac's On the Road. Delphine Seyrig made her film debut as Milo's wife.