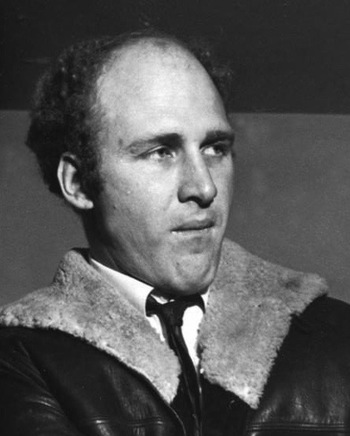 "Take what you can use and let the rest go by."
Advertisement:

Kenneth Elton Kesey (September 17, 1935 – November 10, 2001) was an American writer from Oregon, best known for authoring the classic novel One Flew Over the Cuckoo's Nest (which was adapted into the award-winning film of the same name directed by Miloš Forman), as well as the less famous but equally lauded Pacific Northwestern epic Sometimes a Great Notion (which was itself adapted into a film directed by and starring Paul Newman).

If that's all you know about Ken Kesey, though... you're in for a long, strange trip.

To some, Ken Kesey's crowning achievement is not the composition of two classic 20th century novels, but instead his leadership of the Merry Pranksters and his role in the spread of late-1960s psychedelia.note Both the culture and the drugs. Ideal places to find information on the adventures of Kesey and the Pranksters are The Electric Kool-Aid Acid Test by Tom Wolfe, and to a lesser extent Hell's Angels by Hunter S. Thompson and the poem "First Party at Ken Kesey's with Hell's Angels" by Allen Ginsberg.

He was caricatured in Across the Universe (2007) as "Doctor Robert".

Works by Ken Kesey with their own pages:

Other works by Ken Kesey contain examples of: