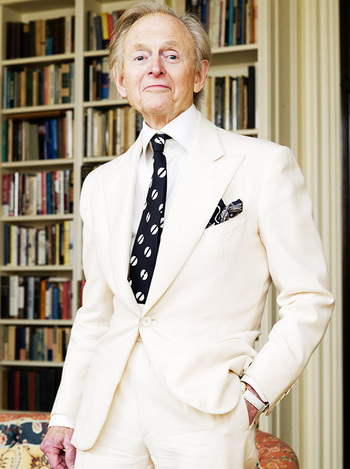 "The reason a writer writes a book is to forget a book and the reason a reader reads one is to remember it."
Advertisement:

Thomas Kennerly Wolfe Jr. (March 2, 1930 – May 14, 2018) was an American author, journalist, and social commentator, who achieved national prominence in the 1960s and was widely known for his association with New Journalism (a style of news writing and journalism developed in the 1960s and 1970s that incorporated literary techniques) and his critique of contemporary life and popular culture.

After studying at Washington and Lee University, Wolfe, a talented baseball pitcher, tried out with the New York Giants but did not make the team. He then attended Yale University and subsequently wrote for several newspapers, including the Springfield Union in Massachusetts and The Washington Post. In the early 1960s he moved to New York City and soon was contributing to various publications, notably the magazines New York, Esquire, and Harper's. Around this time Wolfe adopted his trademark attire: a three-piece white suit and a high-collared silk shirt.

Wolfe published his first book, The Kandy-Kolored Tangerine-Flake Streamline Baby, in 1964. The book is a collection of essays both satirizing and celebrating American trends and celebrities of the 1960s, such as Phil Spector, the New York high life, and the teenage fascination with custom cars. His flamboyant style helped bring about the rise of New Journalism. Another of his books, The Electric Kool-Aid Acid Test (1968), became a classic of 1960s counterculture. It recounts the adventures of Ken Kesey and the Merry Pranksters, who were known for using psychedelic drugs, especially LSD.

In 1979, he published the influential book The Right Stuff about the Mercury Seven astronauts, which was made into a 1983 film of the same name directed by Philip Kaufman. His first novel, The Bonfire of the Vanities, published in 1987, was met with critical acclaim and also became a commercial success. This was later made into a film directed by Brian De Palma starring Tom Hanks, Melanie Griffith, and Bruce Willis.

He is not to be confused with Thomas Wolfe.