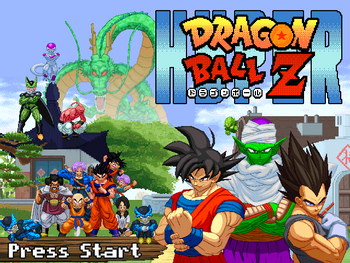 Hyper Dragon Ball Z is a freeware game developed from the M.U.G.E.N engine by fans of the anime dubbed "Team Z2". The gameplay focuses on the mechanics inspired by Street Fighter and Darkstalkers with other fighting games thrown into the mix (like Marvel vs. Capcom and The King of Fighters). Initially beginning as a simple brand of Dragon Ball Z characters to go against the traditional Dragon Ball Z characters introduced into M.U.G.E.N. so far, the Z2 team of Balthazar (idea conceiver) and Cybaster (primary coder) expanded to include various others, including inspiring some other smaller projects in the team's honor. It's come to the point that a game based on the Z2 characters was realized, and the roster expanded from Goku and Vegeta to many more.

A beginning build of the game itself only included Goku, Vegeta, SS Goku, Mr. Satan, and the Saibamen; an updated EVO 2014 build replaced Mr. Satan and the Saibamen (who are still in the game as non playable characters.) with Ultimate Gohan and a beta build of Final Form Frieza, along with some new music for the existing stages and new stages. The "Majin Build" brought back Mr. Satan and included an updated Final Form Frieza along with new characters (Majin Vegeta and Babidi). Piccolo was then released on Christmas 2016, and was included with the Champ Build

along with various updates (including, as the name suggests, an overhauled Mr. Satan). Super Buu was then released on August 8th 2017. Gotenks came afterwards early in 2018. Tien Shinhan was released in December of that same year. Krillin and Android 18 were released on Christmas Eve of 2019. In December of 2020, the Indigo Build was released, and with it, SSJ Vegeta (along with his Super Saiyan Blue form, which was also retroactively added to SSJ Goku, hence the name of the build), a bonus game based of Dr. Briefs and the Pilaf Gang. In December 2021, Jiren was released.

Soon to be released characters are Cell, and Goku Black. The download for the sample of the game (which includes the latest build) is here