Your Tomcat Is Pregnant 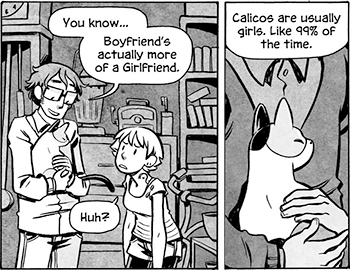 Fuzzy: Oh, so your cat's weight problem is my fault? Thanks a lot.
Sam: I didn't say it was your fault! And I don't think it's a weight problem. Have you looked at his underside? I think Butcher is a lady... and she's pregnant!
— Sam & Fuzzy #450
Advertisement:

So you have a pet and you love him dearly. Let's call him George. One day, you notice that George has put on weight and isn't moving as easily as he used to. Worried, you rush George to the veterinarian, expecting to hear the worst. You're ready for just about everything except what you hear — your "George" is actually a Georgia, and she's pregnant. Oops.

Of course you still love "him", but now what do you do?

May go the other way: a pet thought to be female is revealed to be male. Obviously, if that happens, it isn't likely to involve a pregnancy, but you may begin to suspect things are off if she goes for a very long stretch without having babies. note  And that's not foolproof. She might have just not found or been near any potential mates, and she might also have been spayed. (And 'she' could of course be found out by getting another animal pregnant).

This trope heavily overlaps with Lazily Gender-Flipped Name because the pet is already associated with the first name, and changing the suffix is the easiest way even if the resulting name is a bit... obvious. Others might decide to keep the pet's name the same, making it an example of Gender-Blender Name.

Can easily be Truth in Television for rabbits, guinea pigs, reptiles, and cats. There are no coat patterns exclusive to male cats, not even the orange, cream, and apricot ones note Ginger usually being a good way to tell, and even then, female cats with ginger coats sometimes appear. Conversely, tricolor cats are nearly always female, with extremely rare exceptions., and it takes some experience to be able to identify a cat's genitalia except in particularly blatant cases. The reverse situation is equally common — veterinarians find it just as frequent to let cat owners know that their cat is male when they thought he was female. Both situations commonly occur with rabbits and guinea pigs as it's hard to identify their genitalia as well. It's also difficult to sex a snake without sticking a metal prod up their cloaca, which should only be done by vets or herpetologists, as inexperienced laymen risk hurting the poor snake. If it goes all the way in, it's a boy. If it gets about 1 cm in before you hit something, it's a girl.

If an actual tomcat is pregnant, that's Mister Seahorse (or Egg-Laying Male if it lays eggs).

The vet even says that feeding Stinky pizza and ice cream was "just what the doctor ordered" which is actually terrible advice as cats are lactose intolerant and often get diarrhea from dairy products and garlic is downright ''poisonous'' to cats.

I Thought You Were A Female

Implied in Ice Age 3: Dawn of the Dinosaurs: Sid tries to milk a large mammal to get food for three dinosaur babies and pulls what is heavily implied to be the penis it then chases him and he doesn't get milk while Sid exclaims, "I thought you were a female!"

I Thought You Were A Female

Implied in Ice Age 3: Dawn of the Dinosaurs: Sid tries to milk a large mammal to get food for three dinosaur babies and pulls what is heavily implied to be the penis it then chases him and he doesn't get milk while Sid exclaims, "I thought you were a female!"