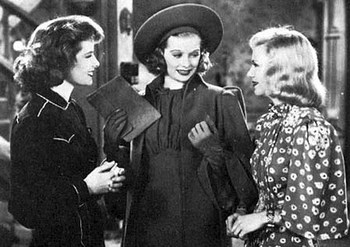 From left to right, Katharine Hepburn, Lucille Ball, and Ginger Rogers.
"It takes more than greasepaint and footlights to make an actress."
Advertisement:

Stage Door is a Dramedy from 1937, directed by Gregory La Cava and featuring an All-Star Cast including Katharine Hepburn, Ginger Rogers, Lucille Ball, Ann Miller, and Eve Arden. It was adapted from the Broadway play of the same name by Edna Ferber and George S. Kaufman.

Set in a theatrical boardinghouse in New York City called the Footlights Club, it's about a group of would-be actresses struggling for their big break. Into the boardinghouse comes Terry Randall (Hepburn), who comes from a wealthy background, is rich herself, and is immediately disliked by many of the others. Gradually, however, she wins them all over.