Film / One Hundred Men and a Girl 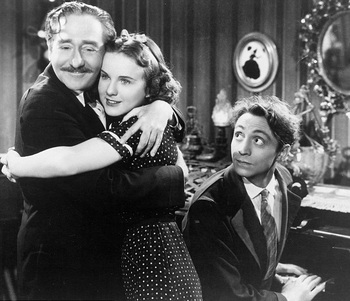 One Hundred Men and a Girl is a 1937 film directed by Henry Koster.

John Cardwell (Adolphe Menjou) is a trombone player who has been out of work for two years. The film opens with John sneaking into an orchestra and begging for a job from the conductor, Leopold Stokowski. Stokowski, not accustomed to receiving people from the street, turns John down flat. On his way out of the building he finds a rich lady's purse, dropped on the street.

John returns to the boarding house where he shares a room with his teenaged daughter Patsy (Deanna Durbin). Facing imminent eviction because he's broke, John uses the money in the purse to pay rent. When she finds out about this, an indignant Patsy insists on returning the purse. She meets Mrs. John R. Frost, wife to radio magnate John R. Frost, who promises Patsy that her husband will bankroll an orchestra and concert for Patsy's father and all of his unemployed musician buddies. Patsy the Determinator sets out to make it happen.

Real Life orchestra conductor Leopold Stokowski was famous enough to be in this movie and also to be parodied three years later by Bugs Bunny in "Long-Haired Hare". ("Leopold! Leopold!")