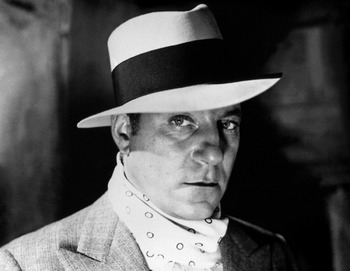 Pepé le Moko is a 1937 film from France directed by Julien Duvivier.

Pepe le Moko (Jean Gabin) is a jewel thief taking refuge in the port of Algiers. ("Le Moko" is slang for a person from Toulon.) Algiers is a French possession and in theory the local authorities could arrest him, but Pepe is living in the Casbah, the native quarter. The Casbah is a law unto itself, filled with closely packed buildings that are connected via rooftops, narrow streets and buildings, and a populace that is intensely hostile to French law enforcement.note A generation after this movie was made the French would discover in Real Life just how hostile, as shown in The Battle of Algiers. It is a law unto itself and Pepe is effectively untouchable there.

However, while the Casbah is a refuge, it is also a prison: Pepe will be arrested by the French police if he steps out of the district. Pepe chafes at being stuck in the Casbah and longs to go back to Paris. Inspector Slimane of the Algiers police knows this, and hopes to use it to coax Pepe into leaving his bolt hole and exposing himself to arrest.

The key to Inspector Slimane's hopes shows up in the person of Gaby, a gorgeous young woman who is the soon-to-be Trophy Wife of an obnoxious businessman. On a visit to the Casbah she meets Pepe. They fall in love. While Pepe and Gaby dream of a future together, the crafty Inspector Slimane schemes to lure Pepe out of the Casbah.

Just one year after this movie was made it received a Shot-for-Shot Remake in America as Algiers, with Charles Boyer playing Pepe.