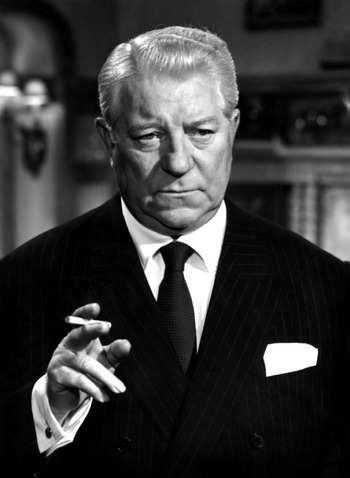 He made his debut at the tail end of the silent era, and by 1934 and La Bandera he was a major star in French cinema. 1937's The Grand Illusion got him attention worldwide, and the movie became the first picture in a non-English language to be nominated for the Academy Award for Best Picture.

World War II and the German occupation of France led Gabin to emigrate to America. His brief career in Hollywood led to disappointment, so he decided to make better use of his time by joining the Free French Forces in North Africa. He fought on the Western front in 1944 and was there for the liberation of Paris.

His exile from French cinema led to a career slump that persisted for some time after the war, until he eventually made a triumphant comeback with the gangster film Touchez pas au grisbi in 1954. He was reunited with Grand Illusion director Jean Renoir in French Cancan, another big hit. His career reinvigorated, Gabin kept acting until the mid-1970s.

One of the very few leading men of French cinema to be equally successful before and after World War II, he went from romantic lead roles (mostly pre-war) to various commanding figures in his 95 movies-long career, with occasional ventures in comedic territory.

He was also famously in a love affair with Marlene Dietrich, mostly during World War II. They appeared in a movie together in 1946, Martin Roumagnac, then broke up.

Tropes features in his works: