Film / Any Number Can Win 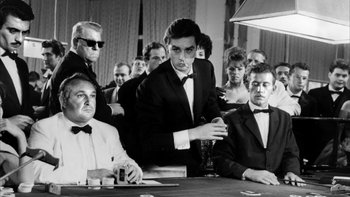 In a casino, you can't always win.
Advertisement:

Any Number Can Win (French: Mélodie en sous-sol, meaning "underground melody") is a 1963 French heist film directed by Henri Verneuil, starring Jean Gabin and Alain Delon. Michel Audiard wrote the dialogues. It is adapted from a 1960 novel by John Trinian, The Big Grab.

Mister Charles (Gabin) Just Got Out of Jail. He wants to take One Last Job before retirement in Australia. He hires Francis (Delon) and his brother-in-law Louis to help him. He plans to rob a casino in Cannes. According to Mister Charles's plan, Francis will go to Cannes and pretend to be a rich high-roller to get access to the backstage of the casino.

Any Number Can Win provides examples of: