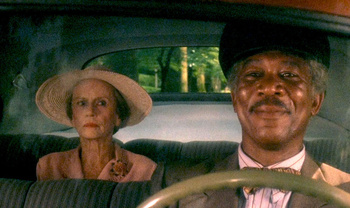 "I am just a driver... I can't take you anywhere unless you tell me where to go."
— Cab Driver, Vampire: The Masquerade – Bloodlines
Advertisement:

A stock character whose main job is to get the other, major characters from Point A to Point B so the plot can progress, after which he usually either drives off and is forgotten, hangs around the car and is forgotten or, in very, very rare cases, actually follows along and is generally forgotten. Every once in a while he might have some comic-relief scene in which he actually gets involved in the action, but not often at all.

However, he's not just a generic taxi driver, he'll have enough of a presence to be a unique character unto himself (he'll usually be given a name, for example) and to make sure that the audience doesn't see him as a piece of mobile furniture. He could be replaced with "So the group went from A to B" but for whatever reason, the author decided to create a scene and a character to go along with it. They may show up again, and may even become a regular if the show goes on for a while, but appearing as anything other than this role feels like a cameo appearance.

Drivers who fall short of this trope, and don't have a personality to speak of, are at high risk of becoming a Disposable Pilot. See also Badass Driver and Getaway Driver.