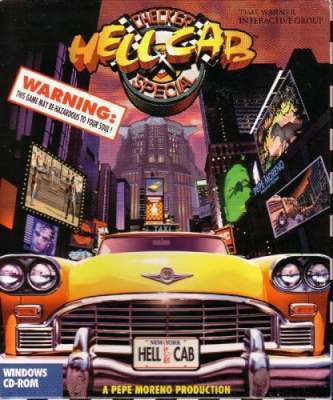 Hell Cab is a Point-and-Click Adventure Game for the PC, developed by Digital Fusion and released in 1993 by Time Warner's Interactive Media Group. The game focuses on you, a traveler arriving at an airport in New York City, whose connecting flight has been delayed. A seemingly friendly cab driver, named Raul, offers to give you a cab tour of the city while you wait. However, upon realizing that you don't have enough money to pay for the whole trip, Raul instead asks you to sign a contract before he agrees to take you anywhere. From this point on, the tour takes a slightly more interesting turn, with your very soul at stake.

Clues in the gamenote (found on the AT Ms) indicate the possibility of plans for a sequel, but it never materialized.