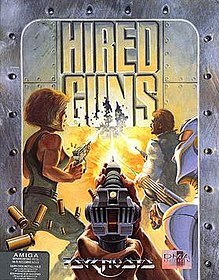 Hired Guns is a 1993 Tactical role playing game for the Amiga and IBM PC. The titular player characters are mercenaries in a somewhat dystopian future, hired to perform a clean-up operation on a deathworld called Graveyard.

(This was a distinct change to the original plot, where they were hired to perform a hostage rescue on Graveyard, only to discover it was a trap... leading to the same end goal.)

Hired Guns was incredibly impressive for the time; although Doom came out the same year with 2.5D maps, Hired Guns has a fully 3D world (although still sprites for items, enemies, etc, and based on cartesian grid cells rather than free polygons), with working lifts, tunnels, water sections (with environmental damage to electronic equipment when submersed). It's also clearly descended from the 4-character party ideas of Dungeon Master - every mission allows the player to select a 4 mercenary team from the total group available, and each mercenary has an independantly controllable quadrant of the screen. (In this it is somewhat similar to Space Hulk, which came out in the same year, and also featured multi-character teams with independant view displays on the screen at the same time.)