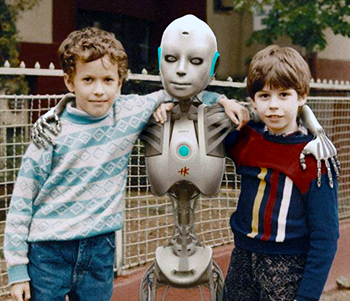 My Nightmare Buddy
"Just for my own edification, did you have to design the robots with such horrifying features? I'm not a design guy, or anything, but I can't see any either performance or aesthetic benefits in designing the robots with cold, skeleton heads, piercing red eyes and giant metal teeth."
— Cracked.com, "A Series of Emails from Cyberdyne's New Tech Guy"

A visual trope in science fiction materials: humanoid robots that look skeletal in design. They all have relatively thin limbs that are reminiscent of bones, and they usually lack "filling" in places where humans have only soft organs, like the abdomen.

Such robots can be very obvious, with sinister, grinning skull-faces, a la T-800 from Terminator films. Others are more subtle, with either fairly realistic faces or no faces at all. Some, such as the T-800s, are designed to be covered with "something", so they literally are robot skeletons once you remove the coverings.

Obvious SkeleBots are meant to scare characters. Often, these are the cold, inhuman soldiers of the Big Bad. On the other hand, subtle SkeleBots are often presented (at least at first) as perfectly innocuous consumer devices, but they're meant to subtly creep out the audience.

This trope also makes quite a bit of sense from a pure engineering standpoint: the bipedal human skeleton is a rather efficient infrastructure. Placing processing power and sensors in a compact, heavily armored box at the top of the body minimizes lag and provides the best vantage point possible, the ribcage centralizes and protects important components, and an upright bipedal stance allows both great strength and dexterity in the upper limbsnote By placing the arms directly over the feet, the upright stance ensures that the weight of any object being held by the arms is as close to being directly over the base of support as possible. This greatly increases balance when holding heavy objects, allowing for greater feats of strength and precision. while also making us one of the few animals that can survive prolonged high-speed travel. note Two legs are always more efficient than four, provided you have the brainpower and coordination to use them. For instance, an average horse would either lose an ultramarathon to an average human or die winning. Eliminating excess weight by replacing muscle with systems of cables or servo motors and organs with compact power supplies would let you strip the body down to, well, the bare bones essentials.

That said, while there might be no mechanical need for the extra padding or housing necessary to keep a robot built on the human frame from looking skeletal, "not looking creepy" is a general design goal for consumer products, especially those with recognizable faces. Subtle SkeleBots with "intact" faces often lean as much towards the "moving corpse" nadir of the Uncanny Valley as Dem Bones. Sometimes overlaps with Unnecessarily Creepy Robot for cases when it would probably be better if the robot didn't resemble a skeleton, but this doesn't seem to have occurred to the designer (or possibly that it did).

If you're specifically looking for Terminator Expies then take a look at Terminator Impersonator.