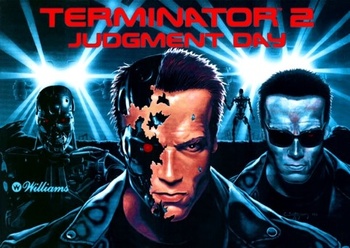 "Get the CPU. It's payback time."
"Let's go."
— The Terminator
Advertisement:

Terminator 2: Judgment Day is a 1991 arcade pinball game designed by Steve Ritchie and released by Williams Electronics. It is based on the movie of the same name, and Arnold Schwarzenegger reprised his role as The Terminator. Unsurprisingly, the game rode the movie's popularity to become the best-selling pinball machine of 1991 by a landslide.

Instead of trying to replicate the plot of the film, the pinball instead opts to recreate the emotional highlights with a whirlwind of nonstop action. Shoot the two Cyberdyne ramps to raise the Security Levels, repeatedly hit the Chase Loop for progressive bonuses, then fire the ball over the left loop and Escape into the saucer to collect more rewards. Hit the dropdown target below the T-800's skull, then load the swinging cannon and shoot the HK-Aerial across the playfield to start multiball. But to score the Super Jackpot among all the chaos will require the cool demeanor of a robot...

A sequel, Terminator 3: Rise of the Machines, came out twelve years later.

A digital version was available for FarSight Studios' The Pinball Arcade until their license to the WMS tables expired on July 1, 2018.

The Terminator: "I'll be back." * In Terminator 3: Rise of the Machines