Pinball / Terminator 3: Rise of the Machines 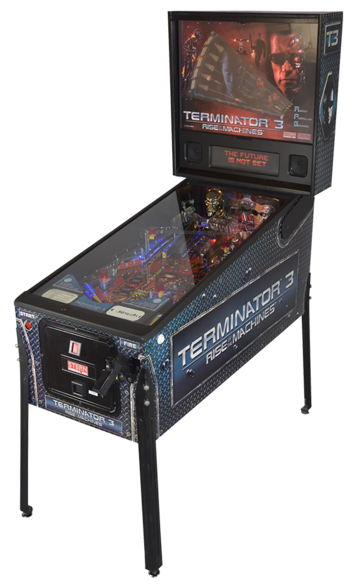 "You are the bomb!"
HE'S BACK! note Steve Ritchie, designer of many of the greatest pinball machines of all time, brings you a new pinball for the 21st century.

Eight years after No Fear: Dangerous Sports, Steve Ritchie returned to arcade pinball with Terminator 3: Rise of the Machines. Released by Stern Pinball in 2003, this table features art by Kevin O'Connor, original voice clips by Arnold Schwarzenegger, and a ball-launching RPG in the backbox itself.

As one would expect, this pinball game follows the plot of the movie, with the player as the T-850 Terminator fighting against the T-X. Since her Plasma Cannon easily outclasses the T-850, the player must first travel around the playfield, collecting weapons and BFGs. Look for opportunities for multiball, Quick Fire, and Payback Time, but don't hesitate to Escape if necessary. Avoid getting distracted when the Command Center initiates a Red Alert, and be ready to use the backglass RPG at the T-X when the time comes. Survive long enough for the Final Battle, and try to Finish Her before she does the same to you.

Stern did not hesitate to play up the significance of the game in advertisements, touting the return of Steve Ritchie and the Terminator 2: Judgment Day team.note Specifically, Chris Granner on sound and Dwight Sullivan with software Many pinball enthusiasts agreed, welcoming Terminator 3 as a worthy return for the "Master of Flow", a game that emphasized long shots, fast action, and precision shooting. The main point of dispute is whether it surpasses the T2 pin, with T2 regarded as having better art and T3 having more demanding gameplay.