Pinball / Star Trek: The Next Generation 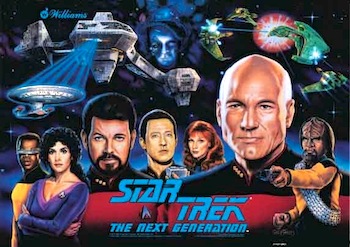 "Send to Starfleet: We have engaged the Borg."
Picard: "All hands, prepare for multi-ball!"
Advertisement:

Star Trek: The Next Generation is a 1993 Pinball machine, designed by Steve Ritchie with artwork by Greg Freres, and released by Williams Electronics. It is the third arcade pinball game based on the Star Trek franchise, and was based on the television series.

The pinball casts the player as a newly-arriving Ensign on the USS Enterprise. True to the series, the player and the crew travel the galaxy and have various encounters, such as a time rift, a visit from Q, encounters with the Ferengi, Romulans, and Cardassians, and an attack by the Borg. Other experiences include holodeck simulations, trips to the Neutral Zone, and chances to collect rare artifacts. Truly skilled players will be able to advance in rank, and ultimately reach the Final Frontier. For added appeal, the playfield features two rotating phaser cannons that shoot pinballs at various targets.

The game is considered one of Steve Ritchie's hardest tables, with demanding shots and dangerous outlanes to punish careless players. It includes original voice clips from the TNG cast, including Patrick Stewart, Jonathan Frakes, and Michael Dorn. As thanks for their participation, each of the stars received a pinball machine at the end of the project. Patrick Stewart says he still plays his, while Marina Sirtis placed hers in the basement where her kids can enjoy it.

A digital version was available for FarSight Studios' The Pinball Arcade until the license for the Williams and Bally tables expired on July 1, 2018.

"Welcome to the Enterprise.":