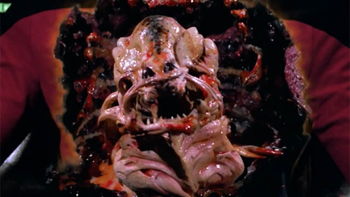 Somebody's got a bad case of worms.
"If you can't take a little bloody nose, maybe you ought to go back home and crawl under your bed. It's not safe out here. It's wondrous, with treasures to satiate desires both subtle and gross. But it's not for the timid."
— Q, "Q Who"
Advertisement:

Where No One Has Gone Before

Too Short A Season

When The Bough Breaks

The Arsenal Of Freedom

Where Silence Has Lease

The Best of Both Worlds (Part I)

Advertisement:
Season 4
The Best of Both Worlds (Part II)

Ship in a Bottle