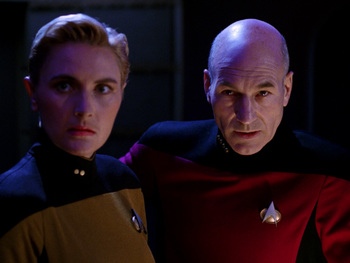 Tasha! You're alive!!!
"Military log, combat date 43625.2. While investigating an unusual radiation anomaly, the Enterprise has encountered what could almost be called a ghost from its own past – the Enterprise-C, the immediate predecessor to this battleship..."
—Captain Picard... but not the one we know.
Advertisement:

Guinan is introducing Worf to the wonders of prune juice when the Enterprise comes upon some sort of space-time disturbance. Suddenly, a ship emerges—the damaged USS Enterprise (NCC-1701-C), displaced 22 years in time. And it has survivors.

Panning back to the bridge of the Enterprise-D, things are... different. The lighting is darker, the design a bit more sinister, the uniforms are more militaristic, everyone is armed, Wesley is a full member of Starfleet, and Tasha Yar is standing at the tactical station! Deanna is nowhere to be found, but Worf's absence is easily explained: the Federation has been at war with the Klingons for over 20 years, a war which they are now on the brink of losing. They desperately need any ship they can get, and the Enterprise-C, though badly damaged, looks repairable.

They bring the survivors on board, including the moderately injured Captain Garrett. She tells Picard and Dr. Crusher that they had been responding to a distress call from a Klingon outpost at Narendra III when they were set upon by four Romulan Warbirds and were moments from destruction when they fell into the rift. Picard laments that a Federation rescue of a Klingon base might have tipped Federation-Klingon relations toward peace and averted some 20 years of war.

Alone of the crew of the Enterprise, Guinan's Bizarre Alien Senses lead her to pick up on the shift in the timeline, though she cannot fully comprehend it; she just knows that something is off. She talks to Picard about it, but isn't able to give him anything more definite than that this isn't what's supposed to be happening, and she implores him to send the Enterprise-C back through the rift to where it belongs. Picard balks at sending 125 people into certain death based only on a few cryptic remarks. Guinan begs him to think of the stakes: saving the lives of 40 billion casualties of war.

Meanwhile, Tasha has been liaising with the acting second in command of the Enterprise-C, Lieutenant Junior Grade Richard Castillo, trying to get the older vessel combat-ready once more. The pair quickly develop some chemistry, but the disconcerting looks that Guinan keeps throwing at Tasha distract them a bit from their budding romance.

Picard commits to sending the Enterprise-C back to the past based on Guinan's intuition. Crusher and Geordi are incredulous that Guinan could know what she claims, but Data suspects that her species has a perception that goes beyond linear time. Riker, meanwhile, questions the logic of such the act, arguing that the Enterprise-C has no possible way of saving Narendra III and the only thing it would really accomplish is sending the crew to their deaths, but Data points out that the Klingons have an awful lot of respect for people who die in battle, and dying in the defense of the Klingon outpost would likely be seen as a very honorable act.

Picard speaks to Captain Garrett about his decision. Garrett would rather fight in the "here and now" than return to a lost cause, but Picard confesses that she'd be facing a losing battle either way: the Federation is mere months from surrender. Just one starship is not going make any impact in the present, but 22 years ago, one ship could stop the war before it starts.

Garrett agrees to return to her own time and begins preparations for a suicidal last stand. But before they can leave, the two ships are suddenly attacked by a passing Klingon Bird-of-Prey on a scouting mission. The Enterprise-C sustains some damage in the fight, resulting in Garrett getting killed by a piece of shrapnel, leaving Castillo in command. Castillo makes preparations to carry out the mission in her stead, and he and Tasha share a tender goodbye. Before the ship can depart, however, Tasha confronts Guinan about the looks, having apparently surmised that her fate in the alternate timeline is a dark one. Guinan admits that in the "correct" timeline, she died horribly and pointlessly. With this news, Tasha decides to transfer to the Enterprise-C and take her chances with the Romulans, where at least her death might make a difference. This couldn't possibly have any consequences down the road at all.

These alternate-timeline Klingons aren't going away, though, and as the Enterprise-C limps back towards the rift, three Birds-of-Prey attack. The Enterprise-D devotes itself wholly to defending its doomed predecessor, suffering major damage. Riker is killed in an explosion, and the Klingons demand the surrender of the ship. "That'll be the day," scoffs Picard, and he leaps into the tactical station to continues fighting to the very last. The Klingon ships batter away at the now-helpless Enterprise-D, and with a warp core breach imminent, it looks like the end for both ships. Just as the Enterprise-D is about to be destroyed, the Enterprise-C makes it into the rift...

...and everything returns to normal. Picard stands on the bridge in the exact spot he was before the change in timeline. He asks for a report. Worf, back once again in his usual spot, reports that his sensor readings fluctuated and what appeared to be a ship has now vanished. Data reports the anomaly is closing in on itself. Just as Picard orders Wesley to plot a new course, Guinan calls up over the intercom and asks if everything is all right. Surprised by her call, Picard answers somewhat bemused that everything is fine on the bridge, and asks her if there is something wrong. Guinan, glancing at a well-lit, happy Ten-Forward, says that nothing is wrong and apologizes if she bothered them. She then sits down to ask Geordi about Tasha Yar.