Recap / Star Trek: The Next Generation S6E10 "Chain of Command" 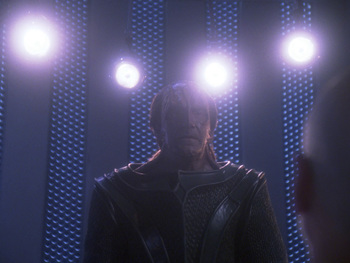 "How many lights do you see?"
Jellico: Lemec is a Cardassian, and Cardassians are like timber wolves, predators. Bold in large numbers, cautious by themselves, and with an instinctive need to establish a dominant position in any social gathering.
Troi: So you're trying to establish a dominant position by making him wait for you. The trouble with wolves is that sometimes in the fight for dominance, one of them ends up dead.
Jellico: In that case, the trick is to be the wolf that's still standing at the end.
Advertisement:

Jean-Luc Picard, Worf, and Beverly Crusher are assigned by Starfleet on a covert mission to seek and destroy a Cardassian biological weapons installation on their border world, Celtris III. In Picard's place, Starfleet assigns Captain Edward Jellico, who has a vastly different style of command and decorum than the Enterprise crew, particularly William Riker, are accustomed to. Under Jellico, the Enterprise patrols the border near Minos Korva, a tactically significant Federation planet, and holds negotiations as to the fate of the planet with Cardassian representatives.

After intensive training in the holodeck, Picard, Worf, and Crusher discreetly arrive on Celtris III and infiltrate the base. However, they find no signs of biological weapons, and suspecting a trap, they attempt to flee. Worf and Crusher escape, but Picard is taken prisoner and brought to Gul Madred, who informs him Celtris III was a trap designed to capture Picard. Gul Madred is already quite familiar with Picard and his service history as a Starfleet officer, and even talks about his deeds with a hint of admiration, calling him the most interesting challenge to walk through his door in years.

Madred uses a number of torture methods, including sensory deprivation, sensory bombardment, forced nakedness, stress positions, dehydration, starvation, physical pain, and cultural humiliation to try to gain knowledge of the Federation's plans for Minos Korva. It quickly becomes clear that Picard legitimately does not know any information that is helpful to the Cardassian, but Madred stubbornly refuses to accept this. Madred attempts another tactic to break Picard's will: he shows his captive four bright lights, and demands that Picard answer that there are five, inflicting intense pain on Picard if he does not agree.

Meanwhile, the Cardassians inform the Enterprise crew that Picard has been captured. Jellico refuses to acknowledge that Picard was on a Starfleet mission, an admission necessary for Picard to receive the rights of a prisoner of war rather than being subjected to torture as a terrorist; this leads to a heated argument between Jellico and Riker upon which Jellico relieves Riker of duty. The crew observes signs of residue from a nearby nebula on the hull of a Cardassian ship, and Jellico suspects a Cardassian fleet may attempt to use the cover of the nebula to launch an attack on Minos Korva. Jellico determines their best course of action is to place mines across the nebula using a shuttlecraft. However, Riker is the most qualified pilot for the mission. Riker candidly criticizes Jellico's command style and only accepts the assignment once Jellico personally asks him to pilot the shuttle instead of ordering him to do so. Riker successfully lays the minefield, and Jellico uses the threat of the minefield to force the Cardassians to disarm and retreat, also demanding Picard's return.

With word of the failure of the Cardassians to secure Minos Korva, Madred attempts one last ploy to break Picard, by falsely claiming that Cardassia has taken the planet and the Enterprise was destroyed in the battle. He offers Picard a choice: to remain in captivity for the rest of his life or live in comfort on Cardassia by admitting he sees five lights. As Picard momentarily considers the offer, a Cardassian officer interrupts the process and informs Madred that Picard must be returned now. As Picard is freed from his bonds and about to be taken away, he turns to Madred and defiantly shouts, "There are four lights!" Picard is returned to the Federation and reinstated as Captain of the Enterprise. Picard admits privately to Deanna Troi that he was saved just in the nick of time, as by that point he was broken enough to be willing to say anything to make the torture stop, and for a brief moment he actually did see five lights.

Tropes featured in "Chain of Command":