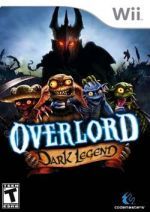 Overlord: Dark Legend is a 2009 third-person Action-Adventure game developed by Climax Studios and published by Codemasters for the Nintendo Wii. The game was released on 23 June 2009 in North America, 26 June in Europe, and 2 July in Australia. Dark Legend is a spinoff of the 2007 video game Overlord, and is set as a prequel. The gameplay is similar to Overlord, but simplified and missing several features of the original game.

Reviews of the game are mixed: praising the humour, story, and controls of the game, but finding problems with the animation, short game length, and lack of complexity or difficulty.