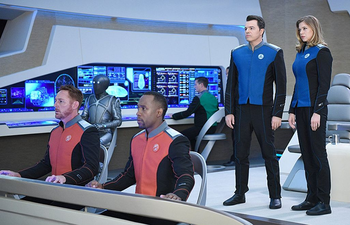 Military and similarly organized groups are structured in a way to manage the functions of their unit. Even in shows where the team may not be technically military, there is a deliberate command infrastructure that designates seniority. As such these characters are either a small group of soldiers working together or they may just be the senior officers commanding an entire division of a platoon or vessel. The crew of a Cool Ship (or any other cool vehicle of sufficient size) often takes this form, and may be supplemented by a Redshirt Army of lesser crewmen on larger vessels. Frequently they are a Badass Crew.
Advertisement:

Compare the Five-Man Band, which has a different structure and purpose but still follows a similar pattern. The primary difference relative to The Squad is that almost everyone in the Command Roster has a position of leadership or authority.

The Command Roster usually follows as such:

Sometimes there are a few additions to the crew. These additional characters may be separate from the others, but often there is overlap.

Some additional roles are not officially part of the crew, but interact with them frequently enough to earn a mention in the team list:

The members can be divided into three types: the leadership roles, the intelligent members and the action-oriented members. This may be why, in comparison to the Five-Man Band, the roles don't always line up perfectly:

Compared to The Squad, however, the roles are a little more consistent:

There are times when various characters are missing or replaced with a different character type, all depending on the needs of the story. It is only a Command Roster when there are at least four characters from the primary list, otherwise it is just The Squad.

The very presence of main characters in command roles, especially if they have an army of Ghost Extras to back them up, typically leads to The Main Characters Do Everything.