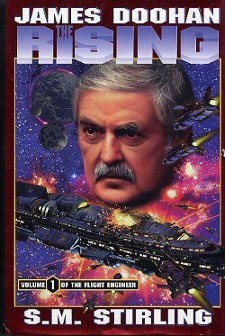 The Flight Engineer is a trilogy of military space opera novels by S.M. Stirling (author of The Draka series) and James Doohan.
Advertisement:

It chronicles the career of Commander Peter Raeder, a Space Fighter pilot for the Commonwealth Space Command who lost a hand in battle and, with it, his ability to fly fighters. He was retrained as an engineering officer to repair the fighters he formerly flew, and assigned to the newly built light carrier CSS Invincible.

The Commonwealth is at war with a group of religious fanatics called the Mollies who cut off all exports of the refined anti-hydrogen that society depends on. They have acquired allies in the form of the spiderlike Fibians.

The Flight Engineer trilogy contains examples of the following tropes: