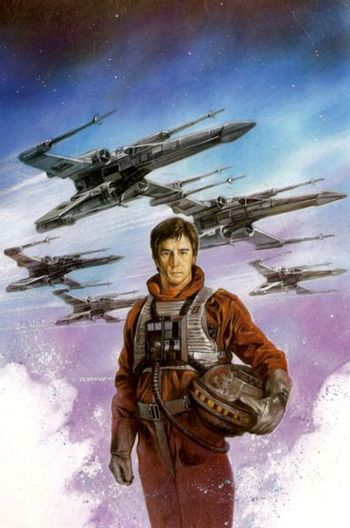 This is Wedge Antilles, pilot and Rebel hero. Behind him are several Incom T-65B X-wing starfighters. Together, they are the two constants for the series.
Advertisement:

is a comic book series within Star Wars Legends. It was published by Dark Horse Comics and ran for 35 issues, beginning in 1995, and ending abruptly in 1998. One of the writers was Michael Stackpole, who was simultaneously writing the X-Wing Series novels, but exactly how much influence he had appears to vary from issue to issue and arc to arc. (He is listed as plotter only in the first few arcs, then usually given credit for the scripts as well.)

This series is set not very long after the Battle of Endor. Initially the comics were supposed to run through three arcs, about twelve issues, but they ran for a good thirty-five issues, not counting the bonus short comic "Rogue Squadron One Half". There is also a prequel of sorts, Rogue Leader

, a three-issue arc that came out in 2005, did not involve any input from Stackpole, and is generally considered inferior due to Off-Model art and rampant decompression.

The Rogue Squadron video games are heavily based on the comics.

A Rogue Squadron film set in the Star Wars canon has been announced, to be helmed by Patty Jenkins and released in 2023. Jenkins confirmed that its writing will be influenced by the games and books in which the squadron appears.