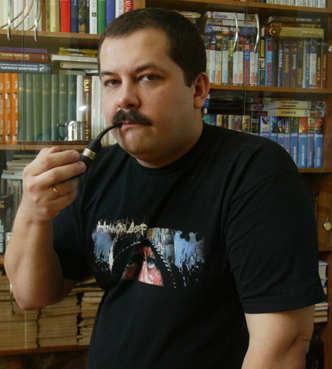 Sergey Lukyanenko (born in 1968) is one of the most famous and prolific modern Russian Science Fiction writers who has been publishing up to three novels yearly since his debut in 1990 until 2002 when new releases became annual. Unlike many other authors, Lukyanenko has, for a long time, eschewed writing long novel series in favor of duologies and trilogies, in which he develops a particular storyline or setting and then moves on to the next one. Although most of his works fall into "hard" Space Opera, he has also worked in such diverse genres as Urban Fantasy (the Night Watch (Series), probably the most famous of his books), Cyberspace (Labyrinth of Reflections trilogy), and Steampunk Alternate History (Seekers of the Sky).