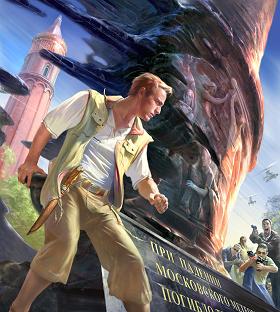 Rough Draft (Черновик, Chernovik) is a science fiction duology written by the popular Russian sci-fi and fantasy writer Sergey Lukyanenko. The duology consists of novels Rough Draft and Final Draft, with the second novel picking up mere hours after the first. Kirill Maximov, the protagonist of the novel, is a college droupout living in Moscow and working as a computer salesman. One day he comes home and discovers that someone else is living in his apartment. Even his dog belongs to someone else and doesn't recognize him. He realizes that he's being slowly Erased From Existence. People he knew, even his best friend, no longer recognize him. His parents claim they've never had a son. Even people on the street appear to have trouble noticing Kirill. All forms of identification (e.g. passport, birth certificate) turn to dust. A few days later, he gets a text message with an address. Arriving there, he finds a water tower with a door. Upon entering it, he finds out that the tower (possibly Bigger on the Inside) is a multi-story apartment, which becomes his new home. Very soon he finds out that he is no longer a Muggle but a "functional", a highly-specialized super-human individual with abilities that allow the functional to do a particular job much better than a normal human. Kirill's job/function is a Customs Officer. His tower is a Warp Zone between parallel worlds with each Portal Door on the ground floor leading to another reality. As part of his duties, he is to police and monitor the travels of other functionals and humans who know about them to other worlds, preventing forbidden items from being taken and charging tariffs, which is the source of his income. His abilities include instant knowledge of any illegal items on the persons of the travelers and the tariffs for them. He also has Super Strength, Super Speed, and a Healing Factor (which also provides immortality). I Know Kung Fu is in full effect. Like any other functional, inside his function (i.e. the tower) he's nigh-indestructible. There are, however, limitations to any functional. All functionals have a "leash" of sourts that connects them to their function. The farther they get from their function, the weaker their functional abilities become. If they go far enough, they become almost human. The "leash" is about 6-7 miles. He soon realizes that being a functional is not what it appears. A function is little more than a fancy cage. Anyone trying to change the status quo gets the attention of a policeman-functional and may be killed.

Kirill is approached by a Moscow politician (a Muggle) and asked to try to open a door to the mythical world of Arkan (AKA Earth 1). According to him, Arkan is nearly identical to our world (Earth 2 or Demos) but historically ahead by 35 years. The politician wants to see how Russia turns out in this world and use it as an example (or warning) for our own world. However, when Kirill finally manages to open a door to Arkan, he finds out that it is, in fact, behind by roughly the same number of years. He finds out that Arkan is used as a home base for the functionals, who use other worlds as test beds, or "rough drafts", for their own development. Despite being historically behind, Arkan is actually more advanced militarily. After barely escaping with his life, Kirill resolves to put a stop to the functionals. However, a high-ranking functional arrives and kills his Muggle Love Interest, forcing Kirill to do battle with her. He succeeds in killing the functional, but, in the process, his own function is destroyed and he appears to have become a human again (one of the first things that happens is a call from his dad asking where he'd been). He also finds out that his best friend Konstantin Chagin is not only a functional but is, in fact, the Curator of Earth 2.

Final Draft picks up a few hours later, as Kirill is trying to avoid the functionals, who are hunting him. He travels to several worlds and winds up in Firmament (AKA Earth 8), a world deliberately kept in Medieval Stasis by the functionals with the exception of its highly-advanced bio-engineering sciences. Firmament is entirely controlled by the Catholic Church, who support genetic engineering, as long as humans remain unchanged themselves (being created in the image of God). This is the source of their conflict with the functionals, who have changed themselves. In fact, Firmament is one of the few worlds who have managed to successfully resist functional influence thanks to their genetically-engineered creatures. The Church cardinals readily take in Kirill, as they respect those who voluntarily give up their functional status. However, a functional attack results in Kirill leaving Firmament. After many adventures, he ends up back in Earth 2 and has to fight his best friend to the death for the Curatorship of this world. After beating (but not killing) him, Kirill once again affirms that he is no longer a functional and leaves.