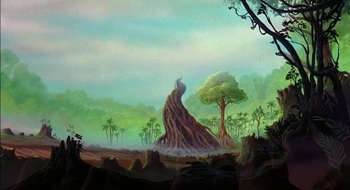 "Whenever I see a world untouched by war, a world of innocence, a world of lush forests and clear rivers... I really just wanna nuke the crap out of it!"
— Ghost, Starcraft II
Advertisement:

When there's a Dystopia of some kind, especially if it involves machinery, there will usually be one spot in the world that still retains nature and beauty. One area where plants flourish, the water is fine, and in general things are very nice.

Places like these are often used in a Green Aesop and Gaia's Lament. Related to Hope Sprouts Eternal. Can go hand in hand with The Promised Land when the characters are trying to reach it, and/or converse about it and all its wonders. Alternatively, the characters may already live there because it's the only habitable place left. In particularly dark versions, it may be on its last legs, with humanity doomed to extinction unless the blight can be undone.