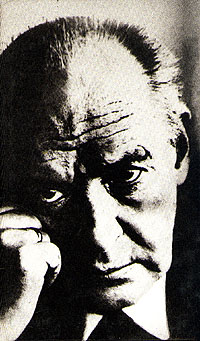 Born in Russia, Nabokov was forced to flee the country at the age of 19, due to some revolution or other, which left him with very anti-communist feelings. His father was a liberal politican and member of the provisional government after the February Revolution. After the rise of the Bolsheviks, he and his family went to Berlin, but Nabokov's father ended up being assassinated by pro-Tsarist right-winger Sergey Taboritskynote Yes, that Taboritsky while trying to stop him from assassinating someone else. This episode is reflected in many of Nabokov's writings. He spent the next two decades in Europe writing novels in Russian, then brought his family to the United States in 1940, where he taught literature and wrote novels in English (making him one of very few authors to be able to write good literature in more than one language).note He's been compared to Joseph Conrad, a Pole who wrote in English,but the comparison is inexact as Conrad wrote only in English The controversial subject matter of one of these made him very famous, and he was able to quit teaching and write full time. Eventually he settled in Switzerland, where he continued writing novels in English, and died in 1977.

He experienced synesthesia (in his case, he saw letters as colors), and was an accomplished amateur lepidopterist (that means he loved butterflies). Nabokov's study of butterflies was significant enough that an entire genus of butterflies, Nabokovia, was named after him. He was also very fond of unreliable narrators.

He is also the author of numerous short stories, poems, plays, lectures, translations (most notably of Eugene Onegin), and biographies (Nikolai Gogol's and his own). Incidentally, he said his first name rhymes with "redeemer" and his last name is pronounced "nuh-BOCK-off," and indeed in Russian it does and it is, though English-speakers rarely say it that way — largely thanks to The Police, whose "Don't Stand So Close To Me" popularized the mispronunciation.