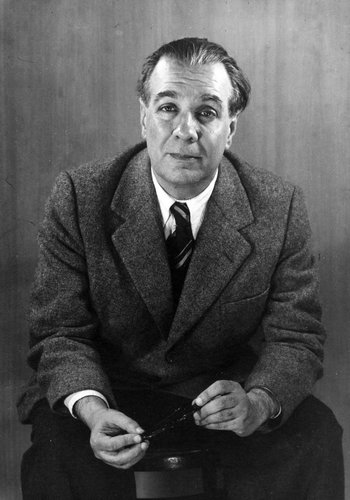 That history should have copied history was already sufficiently astonishing; that history should copy literature was inconceivable. — The Theme of the Traitor and the Hero.
"...It is clear that there is no classification of the Universe not being arbitrary and full of conjectures. The reason for this is very simple: we do not know what thing the universe is."
— Jorge Luis Borges, The Analytical Language of John Wilkins.
Advertisement:

Jorge Luis Borges (1899-1986) is considered the greatest Argentine writer of the twentieth century and an immensely influential author. His short stories, essays and poetry blend truth and fiction in unexpected ways, playing Mind Screwsnote The clever thought-provoking type, not the incoherent rambling Francis E Dec type, just to clarify on the reader at every turn, and exploring deep philosophical themes (idealism, determinism, infinity, the search for personal identity, fiction vs. reality, humanity vs. divinity...) in a rigorous but entertaining way. He is considered an important precursor and originator of many Post Modern devices. Borges himself was an Ultraist, a short lived movement that originated in early 20th-century Spain (where Borges arrived around 1920).

Politically, Borges described himself as a Spencerian anarchist and a classical liberal. He was an outspoken critic of both populist Peronism in his native Argentina and Marxism, and one of his recurring themes was the use of literature and the written word to fabricate false and delusional worldviews, a common classical liberal criticism of fascism and Marxism. However, his vocal support for right-wing capitalist dictators such as Augusto Pinochet and a purported undercurrent of elitism and snobbery in his life and in his work have earned him his fair share of detractors.

Borges became blind due to an inherited disease in his middle age and blindness is a recurring Motif in his later works. Other common motifs are labyrinths, mirrors, libraries, tigers, and daggers. The blind monk Jorge de Burgos in Umberto Eco's The Name of the Rose is one allusion to Borges. The blind librarian in The Shadow of the Torturer by Gene Wolfe may be another.

Some of his best known short stories (Borges didn't write any novels) are:

The other half of his stories are about South Americans knife fighting, such as "The South". He also wrote poetry and literary criticism.

Some of his poems are:

Some of his best-known literary essays are:

Other notable works of his are:

Let others boast of the pages they have written;
I am proud of the ones I have read.