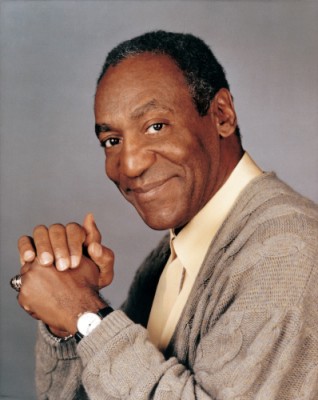 William Henry Cosby (born July 12, 1937) is an American comedian famous for his versatility over his long career; he broke barriers for his fellow African-American entertainers, and — until 2014 — was almost unanimously seen by Americans of all walks of life as a role model.

Born and raised in the Philadelphia projects, Cosby attended Temple University as a physical education major but eventually dropped out to become a standup comedian in the mid-1960s. He was an immediate success, in part because his material — in sharp contrast to most of the black comedians of the day (and today) — was largely apolitical, based instead around Cosby's friends and foibles growing up and the perils of raising his own family, which eventually grew to include five children. Defending this choice, Cosby once noted: "A white person listens to my act and he laughs and he thinks, 'Yeah, that's the way I see it, too.' Okay. He's white. I'm Negro. And we both see things the same way. That must mean that we are alike. Right? So I figure this way I'm doing as much for good race relations as the next guy."

Success in the clubs led to an impressive string of hit comedy and music albums, including the now-classic To Russell, My Brother, Whom I Slept With and the, er, genesis of the similarly beloved "Noah" routine ("It's The Lord, Noah." "Riiiiight!"). Cosby's second album, I Started Out as a Child (1964), was the first to feature stories about his childhood, which would eventually inspire the Fat Albert cartoon series in the 1970s. These stand-up albums were followed in 1965 by a groundbreaking role alongside Robert Culp in the Spy Fiction dramedy I Spy. It was the first time a black actor had ever starred in a television drama, and it earned Cosby the first Emmys (three total) a black actor had ever received.

Naturally, in 1969, the next step was The Bill Cosby Show — no, not that one, the one that featured Cosby as Chet Kincaid, high school gym teacher. No, really, it ran two whole seasons. He even sang the theme song.

The 1970s saw the re-emergence of William H. Cosby Jr., who had gone back to school to earn his doctorate in education. Fat Albert and the Cosby Kids, a hit (12-season!) animated take on the old routines featuring his friends in the projects, and Picture Pages, short interactive educational skits as part of Captain Kangaroo, were the most prominent initial results of this new interest. Also included were memorable guest-starring stints on both Sesame Street and The Electric Company (1971).

At this undisputed high point, he was even starring in hit films with Sidney Poitier: Uptown Saturday Night and the sequel Let's Do It Again, made as a rebuttal to the violent, one-dimensional Blaxploitation films then popular. Somehow, though, while that genre has emerged beloved and even homaged, Cosby's own film career... has not. By the time vanity project Leonard Part 6 debuted in 1987, Cosby was reduced to instructing talk show audiences not to see it, by way of salvaging his big-screen reputation.

Much better received was his 20-odd-year side career as pitchman for Jell-O pudding. Cosby was a fitting spokesman for the product, having mentioned it by name in multiple stand-up routines, perhaps most notably smearing it on the floor as a child to use as booby trap to protect himself against monsters. The standard spot featured Cosby mugging shamelessly while surrounded by cute moppets and – of course – lots and lots of chocolate pudding. Not at all surprisingly, they were instrumental in switching his image from young, hip urban dude to goofy sweater-wearing curmudgeon.

This is how the current generation (or two) knows him best: as Cliff Huxtable in the classic Sitcom The Cosby Show, which lasted from 1984 to 1992 on NBC and was again based around his old routines, this time those featuring his own family. At loose ends (largely due to by-now hopeless typecasting as that same curmudgeon) once it left the air, he took on the TV equivalent of odd jobs, hosting Kids Say the Darndest Things and the 1992 revival of You Bet Your Life. He also dabbled in detective drama (The Cosby Mysteries, natch) for the ABC Mystery Movie revival, and created the animated Nickelodeon series Little Bill and Fatherhood.

His last fling at prime-time television was the 1996–2000 sitcom Cosby, in which he played a lovable elderly curmudgeon in a scenario loosely based on the Britcom One Foot in the Grave. However, the episode most remembered by fans was a fourth-wall-destroying episode in which Cosby's character dreamt that he was Alexander Scott from I Spy (complete with guest appearance by Robert Culp), and Cosby's wife dreamt that she was a character in The Cosby Show.

At last notice, he is participating in the development of a modernized revival of Fat Albert and the Cosby Kids with DreamWorks Animation. As of 2020, it is unclear what the future of the revival will be.

Cosby's diverse range of material has netted him four Emmy Awards and nine Grammy Awards for his many albums... and a Razzie, for Leonard Part 6. He has written best-selling books, hosted comedy festivals, and – most recently – campaigned publicly against what he perceives as a lack of ambition and drive within the African-American community. This last role has earned him considerable controversy, mitigated somewhat by sympathy after the murder of his only son, Ennis, in 1997.

In November 2013, Cosby did his first stand-up special in nearly 30 years, Far From Finished, which aired on Comedy Central. In spite of that title suggesting that he would have more stand-up shows in the future, including a planned Netflix special featuring a show he did on his 77th birthday, this would prove to be his last hurrah due to circumstances that would ultimately end his career and tarnish his image as "America's Dad" forever.

Cosby had been accused of sexual assault as early as 2002, but things kicked into high gear in 2014, when comedian Hannibal Buress brought them up in a stand-up bit that went viral. At least 55 women came forth accusing Cosby of sexual assault, permanently damaging his public image and more or less ending his career. Out of the more than 70 awards and honorary degrees that Cosby has received from various colleges, universities, and organizations, all but a small handful have been rescinded in light of the allegations made against him. As of July 2016, he has also lost his eyesight and is considered legally blind.

Cosby was charged with several sexual assaults, and was tried for two of them in June 2017. The case was such a matter of interest in the Philadelphia area that they bused in a jury all the way from Pittsburgh to Norristown (a western suburb of Philadelphia, where the trial was held because it is the seat of Montgomery County, PA, where Cosby lives and is alleged to have committed the assaults) to ensure a fair trial. This trial ended up with a hung jury, so the judge declared a mistrial. A new trial was held in April 2018, in which Cosby was found guilty on three counts of aggravated indecent assault. He received a sentence of three to ten years in September 2018. However, on June 30, 2021, the Supreme Court of Pennsylvania overturned his conviction on a technicality.note While in a civil case with the woman whose charges were also used in the criminal case, he admitted to drugging women in a deposition. However, when he did this, he did it under a promise from the prosecutor that he wouldn’t be prosecuted for it but with no formal agreement. The testimony was used in the criminal case, so the court found he was deprived of his Fifth Amendment right against self-incrimination. He became a free man the same day, and subsequently announced that he has plans to write a documentary about his case and then return to the stage. On March 7, 2022, the Supreme Court of the United States declined a request from the district attorney to review the state court's decision, leaving the conviction overturned.

Not to be confused with the legendary Bing Crosby, or actor Bill Cobbs. Compare Jimmy Savile, a family-friendly television icon from the United Kingdom whose extensive history of sexual abuse didn't come out until shortly after his death.

NOW YA SEE, THIS IS THE ENDING OF THE PAGE WITH ALL THE TROPES ABOUT OL' ME.