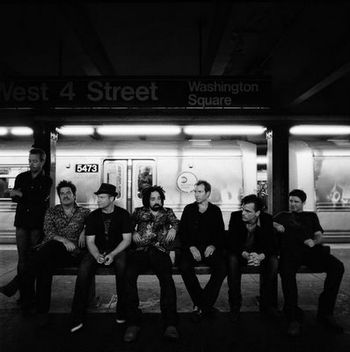 Well I dreamt I saw you walking up a hillside in the snow
Casting shadows on the winter sky as you stood there counting crows
One for sorrow, two for joy
Three for girls and four for boys
Five for silver, six for gold
Seven for a secret never to be told
—"A Murder of One", August and Everything After
Advertisement:

Counting Crows is an alternative rock band from Berkeley, California. They gained popularity in the mid-nineties for their debut album, August and Everything After. The band takes its name from the divination rhyme about crows, which also appears in the song "A Murder of One," quoted above. The group is fronted by and essentially is singer-songwriter Adam Duritz, a "Russian-Jew-American impersonating African-Jamaican" whose lyrics are largely inspired by his personal relationships, life, and chronic dissociative disorder.

Their music can be best described as a harmonious blending of alternative rock and country rock. Some of their most prominent influences include Van Morrison, R.E.M., Bob Dylan, The Band, and Neil Young; they have paid tribute to many of their other influences with their cover album Underwater Sunshine.

Music by Counting Crows has been featured on the soundtracks of Clueless, Mr. Deeds , Cruel Intentions, Two Weeks Notice, and Shrek 2. "Accidentally in Love" from Shrek 2 was nominated for the Best Original Song Oscar in 2005 and played at the Oscar ceremony.

The band is unusual in that it actively encourages the recording of its concerts and the distribution of the resulting bootleg recordings. The band hosts a trading network on its website

, which offers video and audio bootlegs for free.

Having a sense of oneself as an outside observer of one’s own experiences is a fairly common symptom of dissociative disorders; a person suffering this disorder may not feel connected to their body or their self.