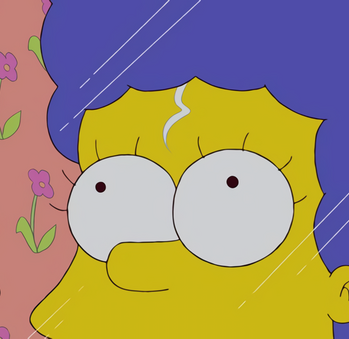 A few months ago, I was having my semiannual haircut, and I had the strangest revelation. [Cut to Willy Wonka having his hair cut by an Oompa-Loompa. He looks in a mirror, sees a strand of gray hair on his shoulder, and picks it up] In that one silver hair, I saw reflected my life's work, my factory, my beloved Oompa-Loompas. Who would watch over them when I was gone? I realized in that moment, "I must find an heir."
— Willy Wonka, Charlie and the Chocolate Factory (2005 version)
Advertisement:

A character angsting about how they're getting old is a great source of drama. But how do we kick off this drama? What are some cultural signs of getting old? A milestone birthday? Nope. How would we iron out the birthday business to get to the development of the character's angst? Besides, we might ruin the appeal of the character's Vague Age. Bodily malfunctions like creaky joints? That might imply too old an age. Gray hair? People of all ages get those. But it's mainly associated with middle age. And it doesn't have any lasting impact, as long as they're removed or dyed over. And if it's only one strand, it's not immediately visible to the naked eye. Besides, it's just hair color and doesn't really impact anything else, other than the angst and freaking out about getting old that it is often the source of. Hence we have the First Gray Hair, which automatically equals age. A character is looking in the mirror (or at their hair itself, if it's long enough for that) and suddenly sees a glint of something different from their usual hair color. (S)He gives in to curiosity and inspects more closely to find that it's...GRAY HAIR! And on their own head, too! And thus the angsting about getting old begins.

Some may wonder whether it is worth it to have a character making a big deal over finding that one or more strands of his hair have changed color (even if it is to gray or white). Then again, Tropes Are Tools, and the First Gray Hair is often used for An Aesop about how growing older is a natural process and not necessarily a bad thing once the character has overcome his angst on his own or by force. It's also a harbinger: while the First Gray Hair is harmless by itself, there are more to come, one by one, until it's all gray, or even gone; also, it's tangible proof that they're leaving youth behind. Unfortunately, though, this way of dealing with having found the First Gray Hair seems to be limited to men who find them. Women who have found this tend to have more prolonged angst and are additionally shown removing or dyeing over their grays.

And yes, the topic almost invites jokes about the first grey pubic hair, basically one way this trope can be Played for Laughs.

Compare Ma'am Shock, Milestone Birthday Angst. May lead to Mid-Life Crisis Car if Played for Laughs, or to Feeling Their Age. For certain men, however, it may just be the first step on the road to attractiveness. A woman, particularly in older works, may become an Elderly Blue-Haired Lady.

Aunt Ellen decides not to celebrate her 50th birthday with Iris due to her worries about getting old upon discovering a strand of gray hair on her.

Aunt Ellen decides not to celebrate her 50th birthday with Iris due to her worries about getting old upon discovering a strand of gray hair on her.