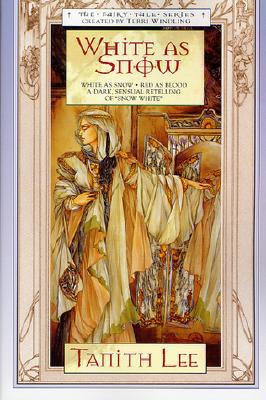 What did the mirror see?
Advertisement:

Once upon a time, there was a mirror.

So begins a dark retelling of Snow White by British fantasy author Tanith Lee. Arpazia is the daughter of a pagan lord who is under attack by the Christian king Draco. Her old nurse tells the girl that her father will give her wings to escape the fighting, which Arpazia doesn't understand... until her father places a knife on the table. Realizing she is going to die if she stays, Arpazia and her maid try to flee, but end up running right into Draco's army. Draco rapes Arpazia, after which she curses him. Fearing the curse, he marries her. Nine months later, Arpazia gives birth to a little girl who is white as snow, black as wood, and red as blood, the curse she had conjured thrown back at her.

As Arpazia loses touch with reality more and more, her daughter Candacis, called Coira, is brought up away from her parents by her uncaring nurse. It is not until the day her father consults an oracle when she is seven years old that she first truly sees her mother and, platonically, falls in love with her. Unfortunately for the girl, the mother's love is in that same instant given to a handsome young hunter with deep ties to the old gods of the land.

White as Snow provides examples of: