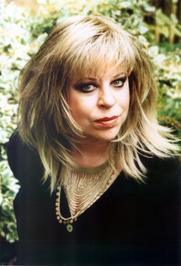 Tanith Lee (1947-2015) was a prolific British SF writer, who wrote over 70 novels and over 200 short stories. Her works include science fiction, fantasy, and horror, for adults and for children.

A dyslexic, she didn't learn to read until she was eight years old, when her father taught her. Thereafter she read insatiably. Her first novel, The Dragon Hoard (1971), is a comic fantasy that takes the mickey out a wide range of fairy tale and mythology tropes while telling the story of how Prince Jasleth was forced to go on a quest after his family was cursed by a sorceress who wasn't invited to his birthday party. Other notable works for younger readers include The Unicorn Trilogy (1991-1997) and the Piratica series (2004-2007).

Owing to changes in the publishing industry in the 1990s, her work fell out of favor precisely because she was incredibly prolific and changed her subject matter and even her subgenre often. Publishers wanted authors to stick with one style, one genre, create an image and produce that way all the time. She continued to write, but had to store all her manuscripts because nobody wanted them. She was helped by the small press movement and the resolution of a court fight over some of her rights. At the end, she was working on a "Colouring Book" series, contemporary Gothic tales.

Her handwriting was almost illegible and she joked it would prove she was a "maniac".

Works by Tanith Lee with their own trope page include: