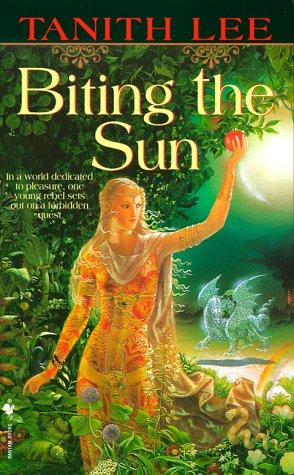 The Eden imagery is your guess as much as mine.
In The '70s, Tanith Lee wrote two short novels entitled Don't Bite The Sun and its sequel Drinking Sapphire Wine. These novels were later collected into a single volume as Biting the Sun.
Advertisement:

The dome cities of Four BEE, Four BAA and Four BOO exist on a planet that is mostly desert. Within the cities, men and women can live forever in near-total hedonism, in the midst of luxurious surroundings with lots of bizarre, beautiful amusements. "Jang", the younger immortals, are expected to be wild, crazy, impulsive teenager/college student types, eventually graduating to become "Older People". Every morning sparkles with radiant sunshine and ends with a gorgeous sunset. Bodies are amazingly glamorous or cutely outre. Robots and androids do all the work.

The protagonist is bored senseless.

The story follows her (sometimes him) as she tries to find something to give her life a bit more meaning. Eventually, of course, this gets her on the wrong side of the city's android authorities...

There are two companion quests in The Outer Worlds named after these books. They feature characters and settings common to the game, but here you are asked to help mechanic Parvati Holcomb connect romantically with Captain Junlei Tennyson.

Tropes present in this book include: