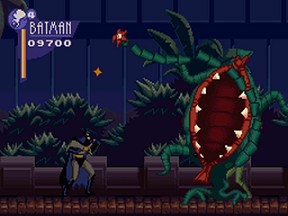 Holy Freudian imagery, Batman!note Image from the game The Adventures of Batman & Robin for the SNES
"Vagina Dentata... What a wonderful phrase!
Vagina Dentata... ain't no passin' craze!
It means no wiener for the rest of your days!
It's a penis-free girl cavity! Vagina Dentata!"
— Queen of Wands comic of 2004-01-21

A classic Body Horror, the Vagina Dentata is a folk myth of toothed female genitalia, which occurs in many cultures worldwide, from Maori to Native American. It is suspected that the concept originally came into play as part of a Scare 'Em Straight cautionary tale, warning of the dangers of sex with strange women, but the surreality of the image, and the castration anxiety it evokes, has made it a hallmark of psychoanalytic painters and writers. Currently, many anti-rape female condoms work along the same principle.

If you believe in deep inner subtext, you're likely to see them in any creature that's moist, has teeth, and devours its victims (often whole and usually alive). Examples run from the Sarlaac pit to Davy Jones' Kraken. Sometimes there seems to be something to that, but usually a cigar is just a cigar... so to speak.

Several women's studies professors have advanced the theory that the vagina-as-Nightmare Fuel trope runs mainly on an inherent revulsion to female sexual power: to quote Stephen J. Ducat, "The fear of entering triumphantly, and leaving diminished." Post-structuralism might have a bone to pick with this notion, since it is based on the binary between lack and desire (i.e. a lack is somehow necessary for desire to be present), while post-structuralism (among other things) decries binarism as restrictive. But we digress.

An alternate theory suggested by some men says that the fear of the vagina dentata arises from the idea that having your penis bitten off would really, really hurt, but of course that doesn't even come close to explaining why they'd imagine teeth in a vagina in the first place. Strangely enough, this trope has not diminished the male enthusiasm for fellatio. This may be explained by the fact that most legends of Vagina Dentata show said toothed orifice as having a mind of its own, and a rather malicious one at that, whereas the standard mouth is manifestly under the control of its owner. Others point out that the idea of a secret mouth — sharp, nasty, and ready to bite you when you least expect it — is terrifying in and of itself (compare the similarly visceral but less Freudian Belly Mouth, especially when it appears as a surprise, like during the defibrillation scene in The Thing (1982)).

It's worth noting that if a (normal, humannote obviously the game changes if we're regarding some kind of demon, transhuman, or whatever who would have access to extraordinary anatomy) woman really did have teeth down there, she would still need to Kegel the crap out of her pelvic muscles to make them strong enough to tear skin. Otherwise, the teeth would do nothing more than just feel weird, really, unless they were somehow exceptionally sharp, although this would naturally run the risk of injuring the woman in question as well. (Not to mention imagining what it would be like to bear children through that kind of an opening.)

Note that a woman with a Vagina Dentata, especially one who can control it, can be an example of a Horny Devil too, as both tropes were born from legends warning against sex with strange women. Or a warning for women to not come too near in that special time of the month. Some cultures kept their women in special houses at that time, others would just say: try anything and theirs will eat yours — or make it fall off. Subtrope to Super Sex Organs. Raunchier Sister Trope to Lamprey Mouth and Flower Mouth. The Gender Inverted version of the trope, "Penis Dentatus", usually in the form of oblong objects or creatures with teeth or spikes, is not entirely unheard of and tends to symbolize masculine dominance or brutality, if not being an outright metaphor for sexual violence ... and shockingly enough, is Truth in Television for certain animal species

(the most infamous being cats).note Thankfully, the most horrific examples that approach true "Penis Dentatus" territory are limited to invertebrate animals; most if not all of the vertebrate examples are quite tame in comparison.

Of course, usage of the trope is just as likely to not originate in Sexual subtext or Freudian imagery at all, instead just being a normal horizontal mouth that was rotated ninety degrees for the sake of Bizarre Alien Biology or Body Horror.