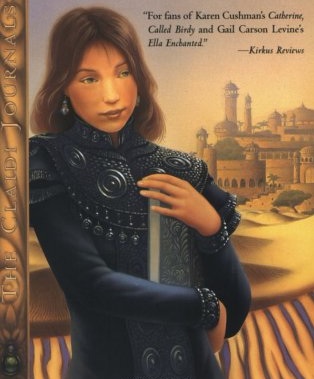 The Claidi Journals are a series of young adult novels by Tanith Lee. The series spans four books: Wolf Tower, Wolf Star, Wolf Queen, and Wolf Wing.note Books 1-3 were originally titled Law of the Wolf Tower, Wolf Star Rise and Queen of the Wolves Claidi is a teenage girl in the service of a cruel princess in the equally cruel House. Her life changes when she aids the escape of a handsome foreign prisoner, Nemian. The two steal away into the desolate wilderness known as the Waste. But, as Claidi soon learns, not everything in the Waste is poisoned - particularly not the singularly terrifying and dashing bandit leader, Argul. Claidi soon finds herself at the center of tangled webs of deceit among warring families. And eventually, she must face come to terms with her own mysterious family and her identity, and choose between them and the new family she has found. You, the reader, are Claidi's only confidant on her many, bizarre adventures.