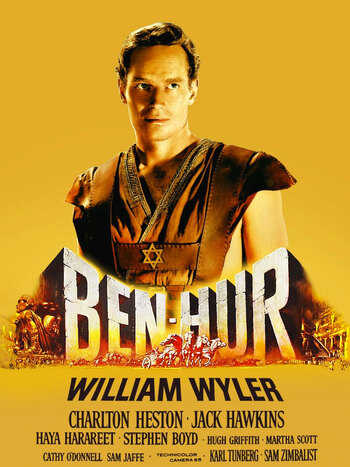 Ben-Hur is a 1959 Panavision Sword and Sandal film directed by William Wyler, produced by Metro-Goldwyn-Mayer and boasting a score by Miklós Rózsa. By far and away the most famous adaptation of the Lew Wallace novel of the same title, this motion picture extravaganza is one of the all-time poster boys for the Epic Movie.

In 1st Century AD Jerusalem at the time of The Roman Empire, Judean prince Judah Ben-Hur (Charlton Heston) gets betrayed by his childhood Roman friend Messala (Stephen Boyd) and goes through a journey to hell and back from being enslaved to becoming a chariot race champion in Rome and taking his revenge. Along the way, Ben-Hur also has some meaningful encounters with the Christ.

The film was a massive box office success and cleaned house at the Academy Awards ceremony in 1960, being nominated for 12 Oscars and winning 11, missing only Best Adapted Screenplay. The film won Best Picture, Wyler won Best Director, Heston won Best Actor and Hugh Griffith took home Best Supporting Actor for playing Sheikh Ilderim. The 11-Oscar win set a record, since matched by Titanic and The Lord of the Rings: The Return of the King but still not beaten (and the latter two films got most of their awards on technical merits such as costuming and special effects).