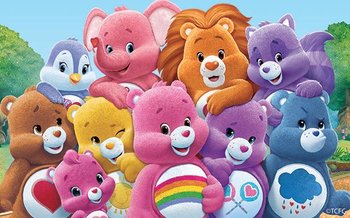 Care Bears & Cousins is a Sequel Series and, for the most part, the next season of Care Bears: Welcome to Care-a-Lot of the infamous Care Bears franchise, retaining the same core seven bears (Tenderheart, Funshine, Cheer, Share, Harmony, Grumpy and Wonderheart) and resident ineffectual villain Beastly.

The series also expanded on Care-A-Lot's mechanics, and explains that while the bears were creating cheer on Earth, the humans' cheer would generate Care Hearts high above the world. These Care Hearts are magically drawn towards the Share Cloud, which will in effect fill the Caring Meter. It goes without saying that if the meter drops below a certain level, the bears will start fading out, and if it dips down to zero, Care-a-Lot disappears. However, sometimes these Care Hearts get lost and don't make their way to the Share Cloud, and thus it's the cousins' job to make sure that the lost Care Hearts end up in the Share Cloud where they belong, using a myriad of equipment invented by Gadgeteer Genius Bright Heart Raccoon. Aside from Bright Heart, the other returning cousins are Brave Heart Lion, who is the leader of the entire operation, Lotsa Heart Elephant, the clumsy big guy, and Cozy Heart Penguin, because Everything's Better with Penguins.

At the start of the series, we see the Share Cloud suddenly deciding to make a beeline back to Care-A-Lot and thus marking the cousins returning home for the first time in aeons. The series focuses on the cousins' attempt to blend back in with the bears, as well as dealing with Beastly's mischief.

A Netflix exclusive after Welcome to Care-a-Lot got royally screwed over by Hasbro and The Hub, it was originally scheduled for 2016, but the release was pushed forward and Season 1 premiered with 6 episodes in November 2015. The second season premiered on the February 5th, 2016 with another 6 episodes. The series was temporarily replaced with the infamous web series Care Package Chronicles in 2017. Shortly after that, Care Bears: Unlock the Magic would then kickstart the next generation of the franchise in 2019.