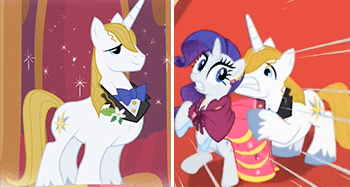 Looks like a stallion, acts like a foal.
"I was raised to be charming, not sincere."
— Cinderella's Prince, Into the Woods
Advertisement:

The opposite of Prince Charming, a prince, or someone at least of high nobility, who is absolutely wrong for the heroine or Love Interest, because he is boring, shallow, or a total jerk (if not outright The Evil Prince). The princess will either fall for that prince at first or have an Arranged Marriage with him, but she will end up with the commoner guy instead (who might be a prince himself and not know it). This is a common character in Fractured Fairy Tales.

Despite the title, this can happen with princesses. It's just rarer.

A variation on the Romantic False Lead — except here the "prince" is clearly the Wrong Guy. This may be done to Prince Charming retroactively by Derailing Love Interests.

Not to be confused with Prince Charming Wannabe, who is not a literal prince, but often displays many of the same wrong-guy traits as this guy.

Prince Hans is revealed to be a subversion of the Prince Charming trope Disney is known for.

Prince Hans is revealed to be a subversion of the Prince Charming trope Disney is known for.